Cathy observes that after decades of calloused and abusive behavior, Mike Rinder not only abandoned their family, but caused irreparable harm as well.

I was married to Mike for over 31 years and we had two children and lived together all those decades.

And one day, while Mike was in London, I was not hearing from him at all. I didn’t get any messages or a normal letter, even if it’s a little note, or anything. And found out that he had left. He had walked out.

So, we didn’t hear from him, didn’t know where he was, we’re concerned for his safety, obviously. And nothing was heard. So some weeks later an associate of mine, not even a close friend, saw me and informed me they got an email from Mike Rinder asking that person to tell me that he left and isn’t coming back. So literally, this person isn’t even like a close friend at all. So that is how Mike Rinder, after over three decades of marriage and raising two children, determined to tell me he was leaving us. And he deserted the whole family and broke all agreements and just didn’t say a thing and just, that was it.

So some months later, also quite out of the blue, I was informed that my son was diagnosed with cancer, a rare form of malignant melanoma called desmoplastic melanoma. And he was 24 years old and they didn’t give him many years more to live. It’s a very aggressive cancer. So at that point, every—the world changed. Like, our lives changed at that point.

So it was determined the only way to get rid of it, in his case, is to take it out. So he had a surgery and they had to take—you know, it’s his right side, the whole, this whole part of his face off and go in and get it all out because it had traveled.

So that took quite a while. It included four major surgeries, four or five plastic surgeries, six weeks of radiation treatment six days a week. And that was gruesome. Okay. It’s horrible, it’s painful, it practically knocked him off his feet, blew a, you know, hole out of the back of his hair. He had all sorts of repercussions, couldn’t eat, like, he was sick as a dog—horrifying.

So through this entire period—two years—I never once heard from Mike. My kids never heard once from Mike. He never originated any communication in any form—by phone, email anything, letter, nothing.

So in April 2009, Benjamin was just starting on his recovery and had completed his surgeries and radiation treatment. And I felt then there was some leeway, or time to possibly get a hold of Mike and just inform him, that’s all—out of courtesy. So he was—Mike was living in Denver at the time, so I flew out to Denver. And Mike didn’t want to speak to me.

So after I came back from Denver, I was like, okay. I never heard anything, ever, so we carried on with our lives. The concentration, obviously being Benjamin’s recovery, you know, everything to do with it.

And I found out that one day, Mike and three or four of his goon friends, one of whom had a video camera, showed up in front of the Ford Harrison, the building in our church where my son was doing his recovery program, and demanding, all of a sudden, to see his son—like as if he’s the loving father.

Huffy, you know, bulldog coming and “I want to see my son!” Like, hello?! Are you kidding? You know, it’s a lie.

So at that point, realizing, “Whoa, this is not good and this cannot continue and he isn’t going to continue to do this to Benjamin, Taryn, me or anyone.” So we determined, yeah, we’re gonna go. And maybe three, four of his former associates and very good friends for decades who had concern about Mike as well, and Andrew, his brother, we went to see Mike.

Upon seeing him for the first time, he immediately was very unfriendly and obviously did not care to see us.

So all of a sudden, he just grabbed my arms and crossed them in a vise. He was crushing me. I was pinned. I couldn’t move and he put his face right up to me and was screaming, “You bitch, you bitch.” And then I could hear through my ear, my bones starting to crack. And I realized all of a sudden, “Oh, my god. He is breaking my bones. And if I don’t do something he’s going to do damage.”

And he just kept going and going. And I’m screaming at him to stop. And every time I screamed at him to “stop it,” because I could hear it, he did it harder. That—he did like this, he went even tighter and pushed me down more. It was clear he did it in such a way that he was hiding it. Like, so he didn’t want anyone else to see it.

All of a sudden, not because I said “stop,” he just went like this [gesture] and let go. And did this [gesture] and walked away in a huff. And I’m like, “Wow, that was psychotic.” The whole thing was psychotic. So I’m like, a little bit kind of in shock—didn’t expect that. And I turned around and saw blood at my feet in a little puddle and was sort of like, “Wow, where did that blood come from?” And then I looked and it was pouring down my arm, down my fingers onto the ground.

Mike had walked some feet away and I went and showed him, “Look what you did to me.” Like, “You just did this to me.” And he said, “I don’t care.” You know, in the manner Mike Rinder says that, which is pretty flippant.

So, an ambulance was called and they treated these immediate injuries. And then eventually, after that, the thing very much swelled up and I couldn’t move my arm at all or bend my elbow even. And this persisted. So I went to the doctor, of course, and various handlings were done to try physical therapy as a means of correcting that—of, like massages and stuff and hot packs and all the routine handlings one would normally do. And over a period of many months this did not improve it whatsoever. And I had the same pain that I had initially.

So, the long and short of it is, I had a MRI that showed what was really going on. I had surgery to correct it, correct that bone, handle as much of the other scar tissue and all sorts of stuff that had happened in there. But basically the sum up of it is that to this day, even with all of that and then follow-up physical therapy, I did eventually—was able to move my arm. But it’s never going to be normal. It’s, like, permanently to an exact point that they can’t get—it can’t get any better. It’s not going to. So, it’s permanently this way—permanently. I have a permanent swelling, all sorts of stuff, and that’s the way it is. And that is what I was left with as a result of Mike Rinder attacking me.

So a few months later, we decided to go on vacation with the rest of the family, the whole family, everybody who I am very close with over the many decades I’ve known them as well. And we decided, as his mother was getting older in age and wanted to do something, we would take her somewhere different. So we went on a vacation to various parts of Australia. And she loved it and we had a great time.

We finished our vacation, we went back to Melbourne and Barbara went back to her place and Andrew and his family went back to their place. And Barbara discovered upon her return that her place had been broken into and she freaked out. She was really upset. She was just crying and afraid. She didn’t want to stay there anymore. She was afraid.

An investigation was done by the place to discover that Mike Rinder had arrived there and bribed a really old lady with dementia and bought her flowers and chocolate and whatever, to get her to let him into Barbara’s apartment. And it was actually Mike.

When she found that out, she was devastated. So, like, that her own son, Mike Rinder, would do such a criminal act, would so violate his own mother. And she said, “I can’t stop thinking that I actually raised a monster who—because I’m Mike Rinder’s mother.”

And she wrote to him and just wanted to hear back and said in the letter, “Just want to hear back you’ve reformed, you’ve changed your ways, etc.” She never heard. She died asking: “Have I heard from Mike yet?” And, no, none of us did. She didn’t hear—that’s what she died with...waiting for Mike Rinder to make any kind of motion or communication apologizing or anything to show he’s—any one cell in his body—was a decent human being and that she would rest in peace. And she did not get that. And she passed away with a heavy heart because of that. 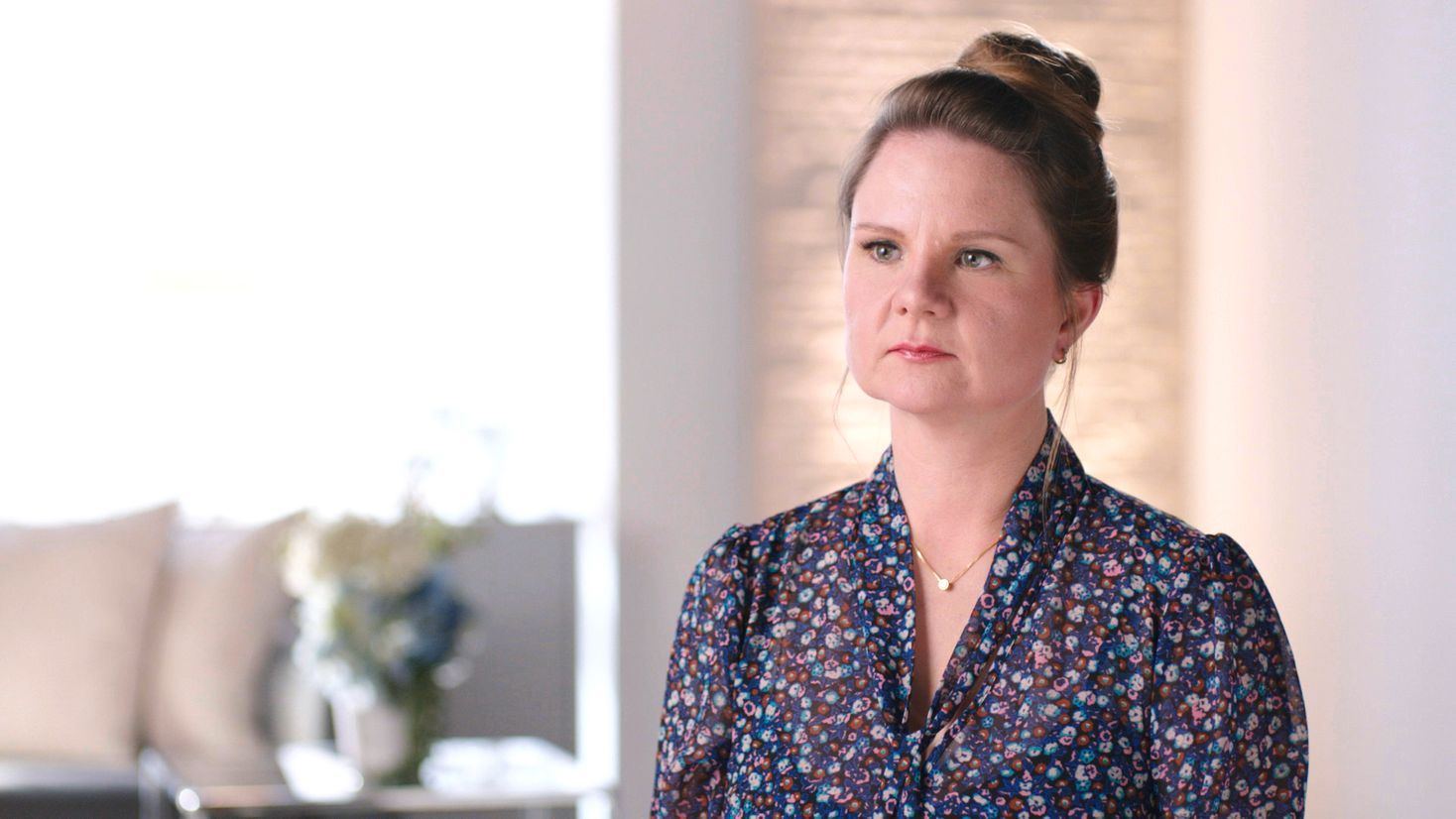